Superman celebrates 75 years: Marking the Man of Steel's birthday in his home town 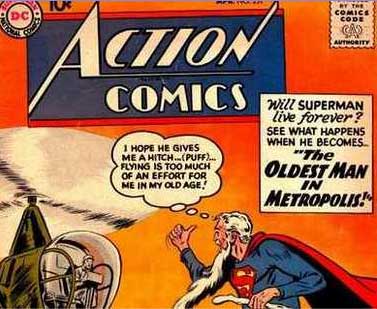 Look, up in the sky! It's the social security Superman.

On Thursday, April 18, Superman celebrates his 75th year of continuous publication with the anniversary of "Action Comics" No. 1, created here in Cleveland by Jerry Siegel and Joe Shuster.

On Sunday and Monday, April 14-15, The Plain Dealer will feature coverage focusing on Superman stories and lore.

All kinds of other stuff to honor Cleveland's favorite son are in play, so stayed tuned.

IN PRAISE OF OLD COMICS

A friend stopped at my desk with a couple of shopping bags full of comic books, mainly 1980s and 1990s Marvels like "Fantastic Four" and "X-Men" and DCs, including a hefty chunk of the amazing "Animal Man" series.

He picked them up as part of a large collection and didn't want them because of their condition.

They are a mess: water-damaged, yellowed, wrinkled, worn and (horrors) some are torn or coverless.

And I love every valueless page.

If these books were in excellent condition, they would be worth thousands of dollars. In our world that values sparkling perfection, they are worth nothing financially but are priceless for their literary value.

It reminds me of what makes comics important -- the art and the story, not what they can be sold for on eBay.

Everyone is so concerned with condition they forget the reason they want to buy a comic. You should buy one because you want to read the story, not because you think it will be worth money. I'm not saying people should roll up a comic and stick it in their back pocket, but read it!

I took those yellowed, smelly, "worthless" comics to the comics class I teach at Case Western Reserve University and parceled them out to students who enjoyed them in all their imperfection.

When I was young, my friends and I could not afford the outrageous cost of 10 and 12 cents a copy for comics like "Superman" and those newcomers, Spider-Man and the Fantastic Four, so we each bought a few, then traded them back and forth so we got to read everything.

This is how to enjoy comics, not encasing them in unbreakable, plastic shells where they will remain in an airless perfection unblemished by touch. Frozen in time, so pristine.