At Home - Really - With Superman 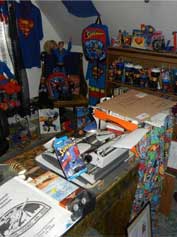 Superman, the story goes, was born on the planet Krypton and sent to Earth in a small rocket by his father when that planet was about to explode.

He was actually born in 1933 in a two-story bungalow in a scruffy neighborhood on the east side of Cleveland, probably in the attic.

If you’re in the area to see Cleveland’s Rock and Roll Hall of Fame, or nearby Canton for the Pro Football Hall of Fame, swing by the Man of Steel’s birthplace. There’s no admission fee.

The matriarch of the house these days is from Lawrence, S.C. Her nickname is “Super Nana,” and she is apt to be wearing a headscarf emblazoned with Superman’s time-honored “S” monogram. And the legal owner of said property is a 6-year-old who wears a red cape when he visits.

Initially not Hattie and Jefferson Gray, who bought the home in Cleveland’s Glenville area in 1983. Three years later, she said, they received a letter from the Cleveland Landmarks Commission saying the house had historic significance because it was the Depression-era residence of a Siegel family whose nerdy son, Jerry, created The Man of Steel. Jerry wrote the story, and his neighborhood pal Joe Shuster drew the cartoon panels. Superman’s inaugural appearance was in 1938, in Action Comics’ first issue. From that point, Superman was up, up and away.

Siegel is said to have typed out the story in the house’s third-floor garret, in the middle of the night, where he could, without waking his family, pursue his dream of becoming a writer of pulp fiction.

That room is now the cosmic navel of the Superman universe; fans swing by on tour buses or park their cars in front of 10622 Kimberley Ave. Some jump out, take photos and zoom away; others hesitatingly mount the porch to knock on the door.

They know they’re at the right place: At the corner of Kimberley and Parkwood Drive, an ornamental city street sign double-marks Kimberley as Joe Shuster Way. And there’s a red S-in-a-triangle sign affixed to the sidewalk fence at the Gray residence.

During the day, if she’s home and not too busy, Hattie Gray invites people into her living room filled with furniture and family photos. Straight ahead is the dining room where special Superman photos, mementos and proclamations are kept in a glass cabinet.

To the left is a well-worn stairs to the second floor, where another staircase goes to the tiny garret. That narrow stairwell, hallway and room at its end are festooned with Superman items – beach blankets, little-kid undies, posters and more – stapled or taped to the walls or hanging from the ceiling.

The garret itself is a homespun catchall of Superman books, comics, action figures and other memorabilia. In the center is a small desk and chair, representative of where Jerry Siegel may have sat when inspiration hit.

Cleveland in the 1930s was a bustling metropolis of ethnic enclaves. Siegel’s parents were Jewish immigrants from Lithuania who lived in the working-class Glenville area.

Jerry made friends with Joe Shuster, another introvert at Glenville High who also came from an Eastern European family and who shared a love for the inexpensive pulp magazines – crime, fantasy, romance, etc. – whose lurid covers turned up monthly at newsstands. The boys became involved with the high school newspaper and, barely out of their teens, tried their hands at writing and illustrating comic strips and publishing homegrown fanzines.

Drawing from “Tarzan” books and comic strips and “Tarzan” movie star Johnny Weissmuller, plus Dick Tracy, Buck Rogers and other pop idols, their Superman gradually evolved from a villainous mastermind to a good guy with super powers and a secret identity.

Comic books were catching on, and pulp publishers wanted a piece of the pie. National Comics (later DC Comics) finally bought Superman, who made his debut in Action Comics in spring 1938. Siegel and Shuster were happy to sign the 10-year deal that called for more comic stories.

The contract stipulated that all rights to Superman would belong to the publisher in exchange for $130.

A Superman comic strip came along in 1939; “The Adventures of Superman” radio show hit the airways the following year.

Feeling they’d been ripped off, the duo filed lawsuits, ultimately settling for $94,000, and continued to write and draw comics with less-successful superheroes. Both died in the 1990s in the Los Angeles area.

But Superman could not be killed by age or even radioactive kryptonite – the invention of radio-show writers, as were Perry White and Jimmy Olson – and the character moved into TV and blockbuster movies as well as other DC comics.

As Hattie and Jefferson Gray and their daughter Fannie are well aware. Mindful and prideful of their home’s history and wanting to keep it in family hands, the Grays deeded the property to grandson Christopher Jefferson Gray, of Columbus, Ohio. When he visits “Super Nana,” “Super Papa” and aunt “Super Te-Te,” he is usually wearing his Superman cape, Hattie said. She added that the 6-year-old isn’t thrilled when tourists ask him to stop leaping about and just pose for a picture.