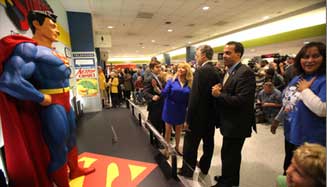 Mayor Frank Jackson, the Siegel and Shuster Society and relatives of Superman creators Jerry Siegel and Joe Shuster spoke to hundreds of Superman fans who showed up to witness the unveiling of the display.

"Did you know Superman was created in Cleveland?" asks the permanent display in the baggage claim area of the airport. "Welcome to Cleveland, where the legend began."

The display includes a statue of Superman and an ersatz telephone booth with an image that alternates between Superman and Clark Kent. An old-fashioned television loops images of Superman from the movies, television and comic books as well as home movies featuring Siegel and Shuster.

"My dad, my mother and Joe would have been delighted, honored and humbled at this honor," said Jerry Siegel's daughter, Laura Siegel Larson, who flew in from California. "They would love to know that millions of people going through this airport would get to see the display and know that Superman was created right here in Cleveland."

Hundreds of comics fans from across the country come to this Kimberly Avenue home in Cleveland's Glenville neighborhood to see where Superman was created.

Many of the hundreds of people who attended the event wore the familiar Superman insignia. Hattie and Jefferson Gray, the couple who lives in the house in Cleveland's Glenville neighborhood where Siegel and Shuster created Superman in the 1930s, were decked out in Superman t-shirts and "Superman" blue clothes.

Mayor Jackson said recognition of Superman is "a big part of who we are" in Cleveland.

The Superman exhibit was put together by the Siegel and Shuster Society, with about $45,000 raised by Superman fans.

Irving Fine, Jerry Siegel's cousin and a founding member of the Siegel and Shuster Society, revealed a family secret about how Clark Kent got his name.

"Jerry was a huge fan of Clark Gable and a B-movie actor named Kent Smith," he told the crowd. "So he put both their names together."

He noted that the Superman license plate is coming and is looking forward to other Superman events that will happen as Superman approaches the 75th anniversary of his 1938 appearance on the cover of DC's "Action Comics" No. 1.

Larson met Joan Sikela Thursday night for the first time. She is the daughter of John Sikela, who was one of the artists who worked with Siegel and Shuster drawing Superman adventures.

"It was so exciting," she recalled. "I remember we would take the tops and bottoms off soup cans, clean them and then tape them together to make a tube. Then dad would place his rolled-up art pages in the cans and we would run them to this very airport so he could mail them to the publisher. It was always a thrill to go with him and watch the planes take off."

Larson told stories passed down in her family of how Superman was created and how her father met and married her mother, Joanne Siegel.

"Joe (Shuster) wanted to model the feisty reporter Lois Lane after a real girl," she said. "And my mom, who was even younger than my dad, placed an ad in the Plain Dealer looking for work as a model. They hired her. And 12 years after she posed for Lois Lane, my dad proposed to her. On Oct. 14, they would have been married for 64 years."